Nehru was a fierce patriot and an ideologue. Luckily for India, he was also a powerful enough leader who could shape an entire Country's viewpoints around his ideology. This is precisely why secularism is such a heavily-used word in Indian lexicon. Nehru was unwavering in his view that India must be accommodating of her minorities (not just the on the basis of religion) and steadfastly inculcated this belief in her citizens. By the sheer force of his personality, Nehru built this 'accommodation' into the Country's DNA.

This was also the time that the majority religion was reformed and large parts of the Country brought into a single legal code. Superstitions were contested and Hinduism probably gained its character as a truly modern religion during this period. The basic tenets were uncontested, but the religion had kind of upgraded itself for 21st century. More importantly, the fanatical, rabid segments were consigned to the fringe.

India's middle class lapped this up as this suited the prevailing mood in the Country as well. As it turned out, the only real opposition came from the religious right and they were rightly considered a bit off. And as the law of unintended consequences goes, Indian polity came to be aligned on one axis. On one extreme was secular, on the other was the religious right. 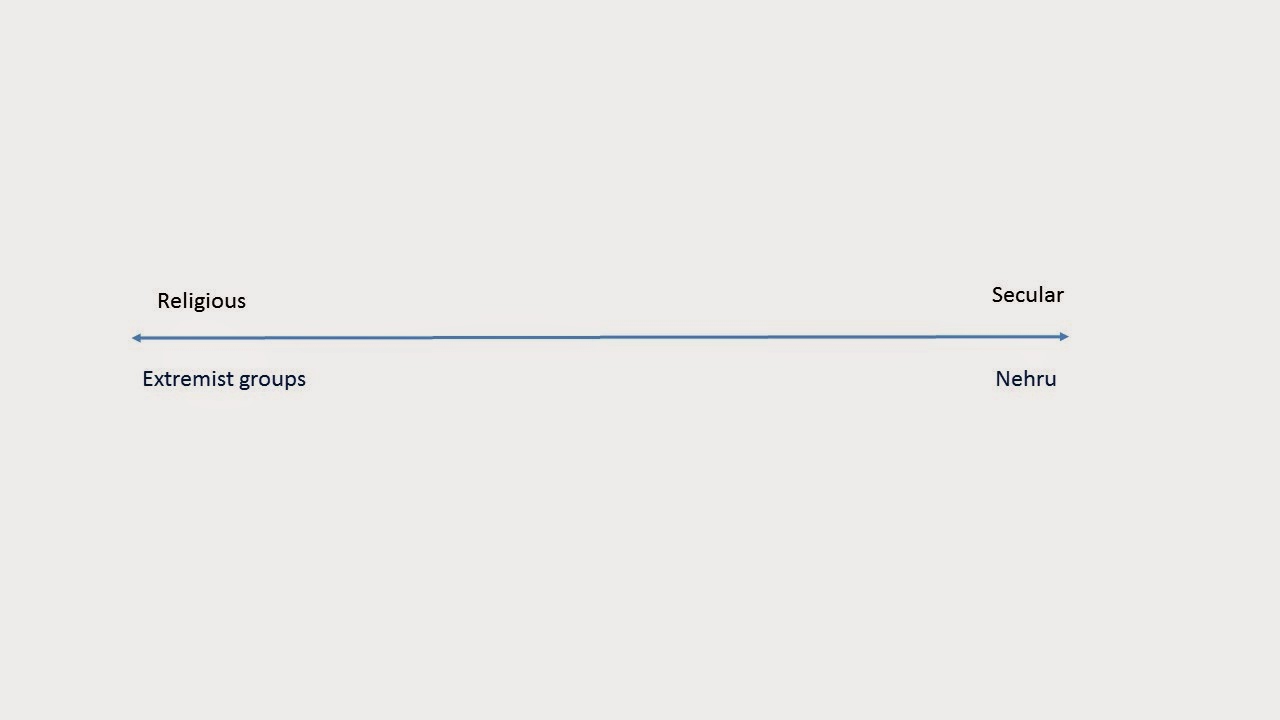 I have the duty to be secular, and a right to be religious - Can these two not co-exist?

So, perversely, Indians had to position themselves on this axis. Indian elite was mildly derisory of anything overtly religious. This axis, although it gave primacy to Secularism, was an oversimplification. Indians who were religious were sooner or later going to feel bad about being prima-facie non-secular. The elites' derision of religiosity also grated middle-class Indians. Because, truth be told, the axes on religion and secular ought to be really defined differently. They are not on either ends of the same spectrum, they are independent axes. 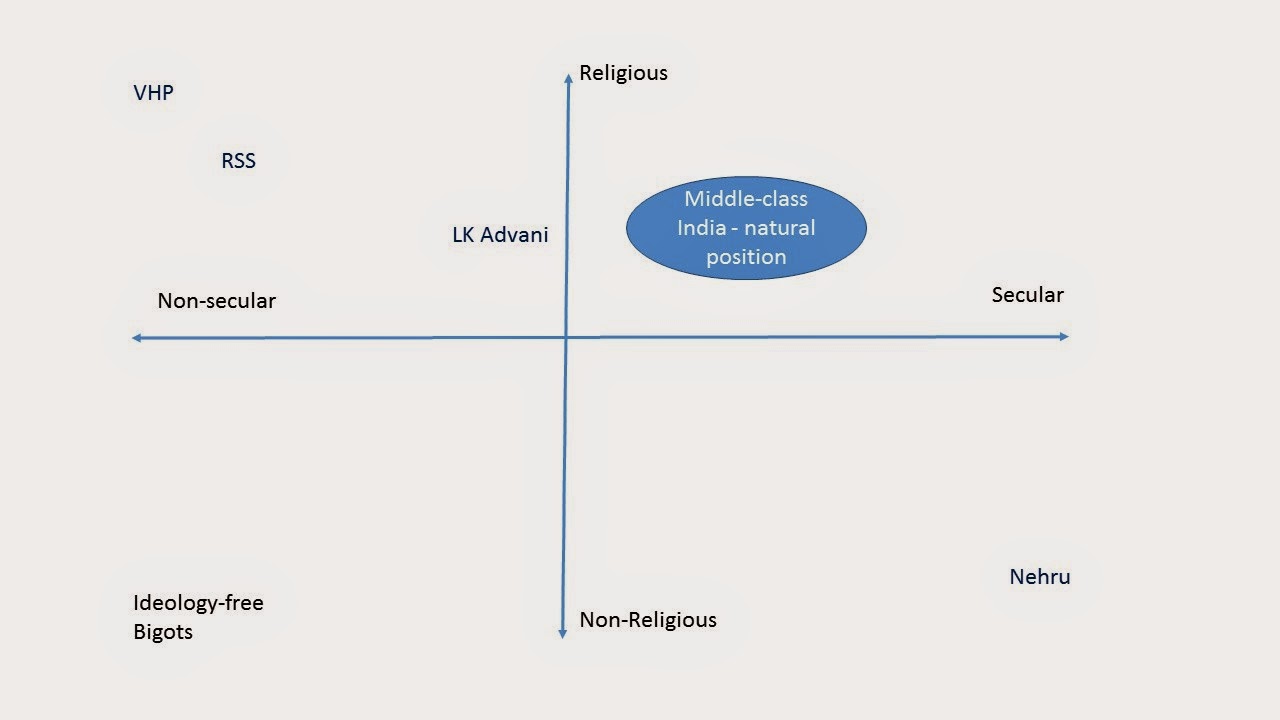 And on these axes, Indians camped in the top right were screaming for someone to articulate their case. The fact that one could be deeply religious and fiercely secular was not well-articulated. Perhaps because he was not that religious, even the visionary Nehru did not realize that this quadrant constituted a majority of Indians and the oversimplification of religious vs. secular was an affront to this brigade. Unwittingly, and by the sheer force of his personality, Nehru was dragging this group to the bottom-right quadrant. 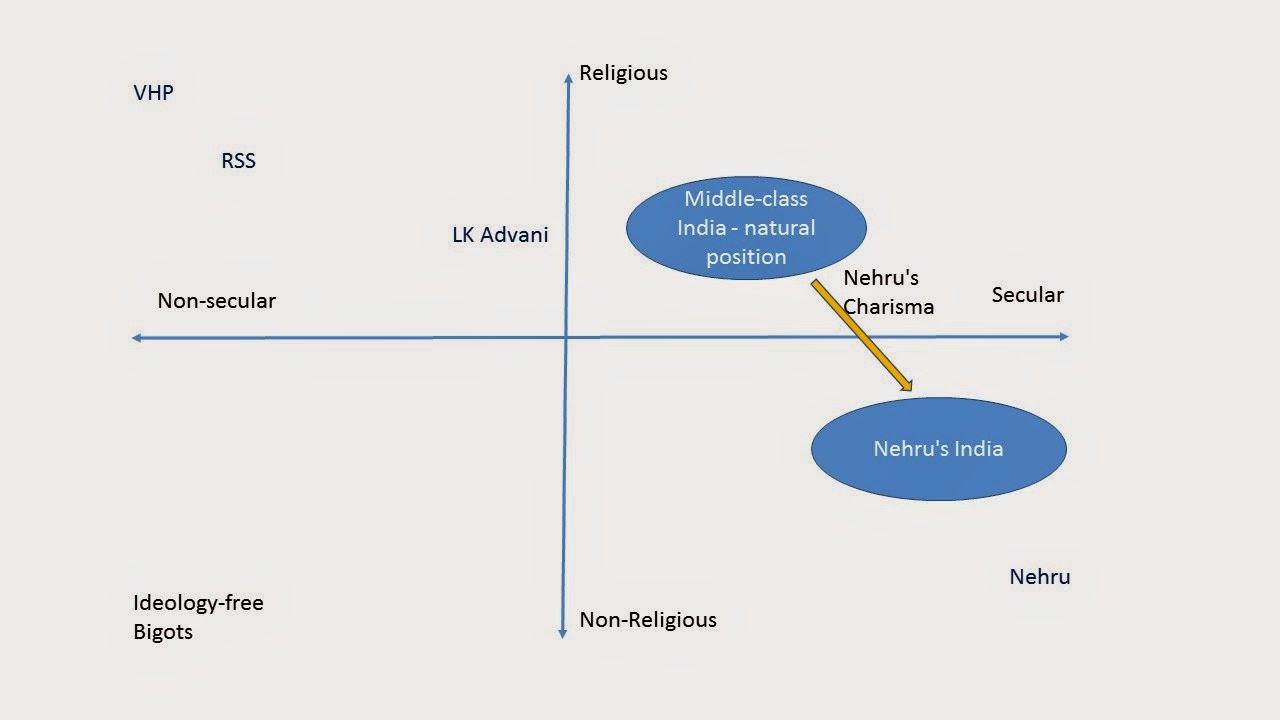 Unfortunately, because India never really had a leader to champion the case for the top-right quadrant, the Country has seen a consistent struggle between religion and secularism. For long, religion did not have a role to play in public life. More recently, religion (Hinduism, particularly) has become more assertive of its place. This is not to be seen as a per se negative. Indians are a deeply religious people and it would be a mistake to again classify this as something to be apologetic about.(a mistake Indian liberal media often tends to make).

Where India lies along the vertical axis is irrelevant, as long as it is on the right side of the horizontal axis. This is a point that Indian elite never got. The liberal media (especially magazines such as The Hindu) thought everyone else was bigoted. And this patronizing attitude drove the middle-class towards the right-wing. This shift towards the right-wing was also helped by the ruling party.

When does one A-word become the other?

Nehru built an India designed to be accommodating of segments that needed to feel secure. However, his progeny had not that kind of vision, nor did they have the charisma to drag the entire Country towards one direction (Nehru-Gandhi family's charisma curve is asymptotic with the X-axis). The party that he built also lost its backbone and came to be in thrall of the family. So, the thin line separating accommodation and appeasement blurred and soon disappeared. 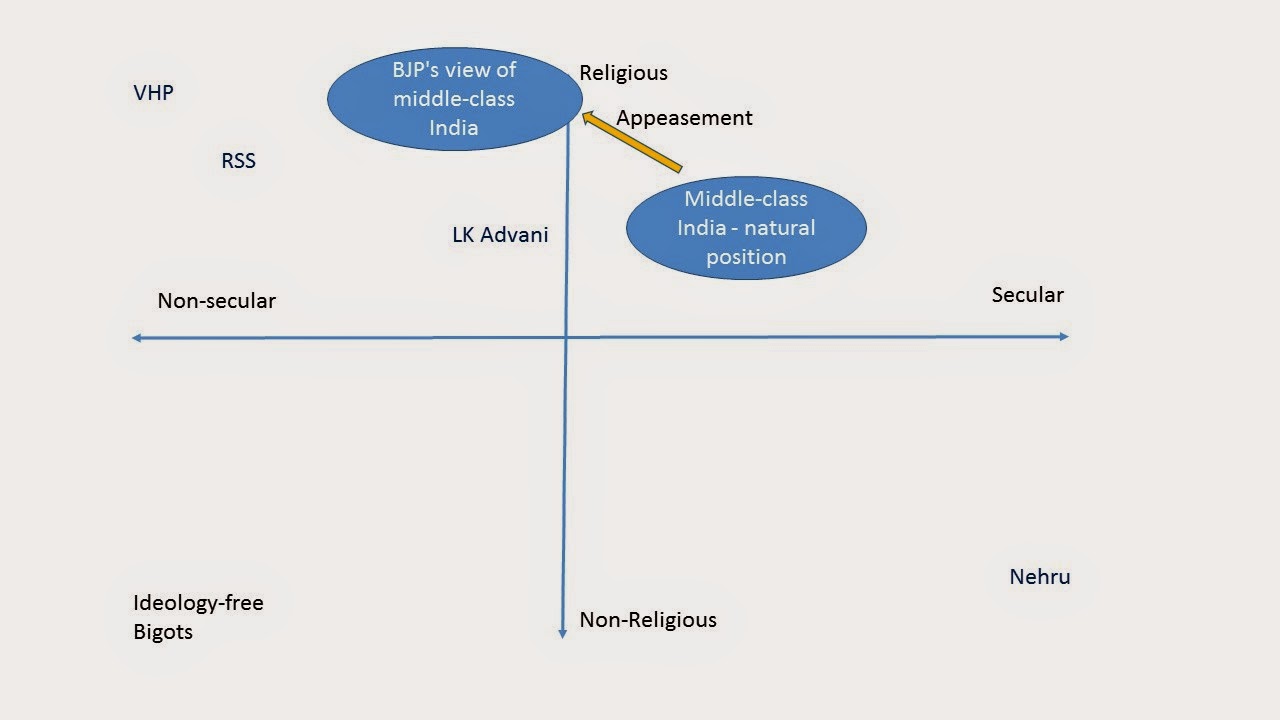 So, it has come to a point where the right-wing is having its moment under the sun. How the Indian right plays its cards now will probably be crucial. The Country's PM has steadfastly stayed away from any talk on or of or about religion in his first four months in power. He has nobly stayed away from anything that takes him away from governance. But apprehensions still persist about what he is really about.

Is he a fiercely secular person who just happens to be religious? Or, is he merely a pragmatist who is going to push 'Hindutva' sooner or later?  I think ordinary Indians, Congress top brass (what is left of it) and RSS are all mulling over this question. 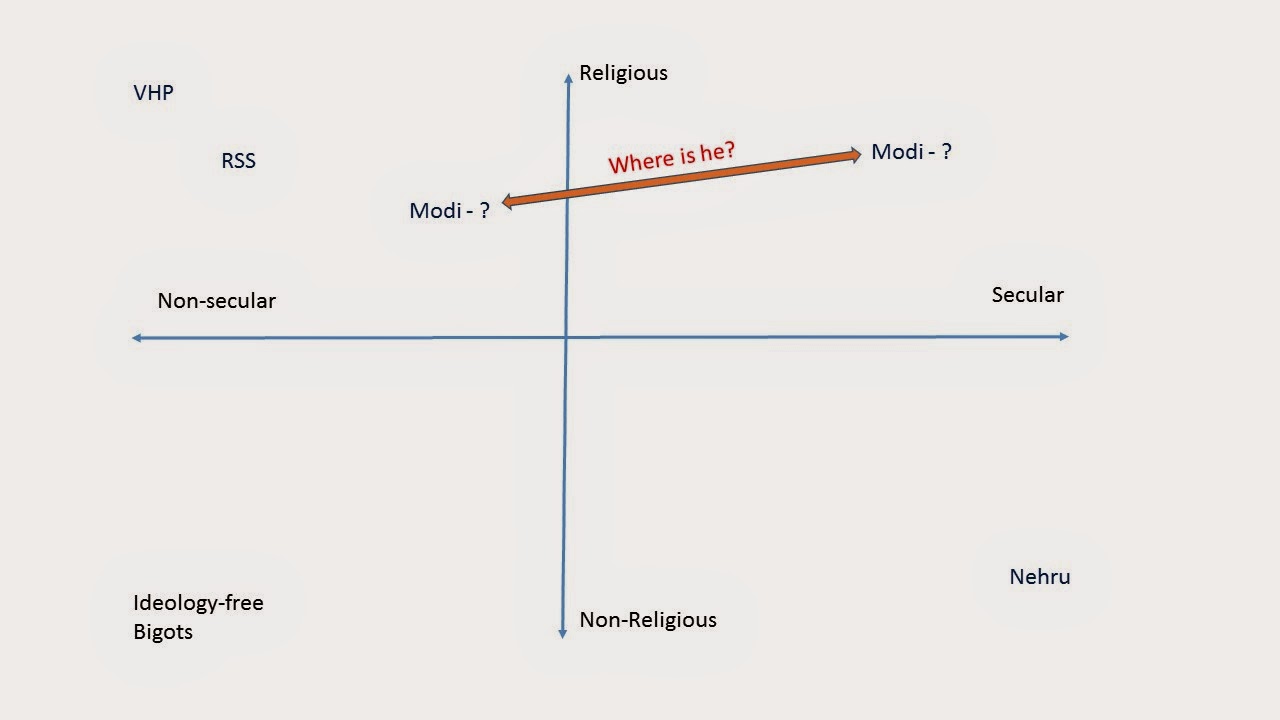 Now, on to the caveats. Kindly bear in mind that this is more or less a thought experiment and nothing more than that. Nor are these charts in any way reflections of my own prejudices. I am the same bigoted guy I was before these charts.

Personally, I have seen a lot of right-wing assertiveness of Indian heritage, Hindu religion and what-not on Social media recently. 30 years ago, we were built to be proud of the fact that Zail Singh was our president, merely because he was a Sikh. Now, this right-wing brigade wants us to be proud of the fact that Obama lights diyas or Cameron says vedic maths. Neither feeling of pride is going to do us any good.

Posted by Rajesh Balasubramanian at 1:16 AM